Back in January as part of my assistant animator brief for university I was allocated 25 hours to help out and assist on the 3rd year’s final films of my choice.

The first of thestop motion films I have been helping out on is called ‘The Monster Picnic’ by Lynda Barnes. After talking to Lynda about what she wanted me to help out on, we decided that my job on this production will be to sculpt the full size maquettes of the two main characters. The maquettes will not be used in the final film but will be used when building the sets and props so she has a scale to work to and from. These 2 sculpts are made in plastecine with a wire frame, using Lynda’s final designs as a reference for me to work from. These sculpts took roughly 4 days to make, and Lynda was very happy with them. 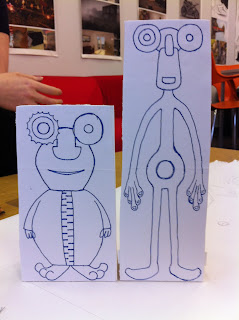 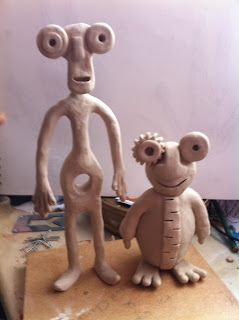 I very much enjoyed working on these maquettes, and really liked how the little guys turned out. Click below to watch the final film directed and animated by Lynda Barnes.

The second 3rd year film I have been helping out on is called ‘The Obsession’ by Kyle Bennett. I had been talking to Kyle the year before about his project and we decided that my job on this film would be to help out with the puppet making. Starting off with the armatures for the two main characters. I told him that he would be better off investing in ball and socket armatures, instead of using wire, as theses puppets would be under a lot of wear and tear. 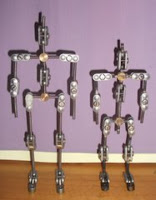 Once the ball and socket armatures arrived and we measured out, cut and glued the metal pieces for the two armatures. With the pieces cut and the joints made, the armatures were very sturdy and now ready to apply the foam to.

I showed Kyle the simplest way to apply the foam to the armatures, by drawing out the outline of the puppet on to a sheet of foam, cutting it out, covering the armature in spray glue then applying the foam to the armature, holding still till the glue had dried. With the armature now covered we had to cut away the excess foam to get the required body shape. Myself and Kyle repeated this process for both characters. I found myself focusing on more on cutting the female's body shape out of the foam.

Due to other commitments and uni work going on at the same time that was all I had the time to help out with on this project. Click below to view the final film directed and animated by Kyle Bennett.
Posted by Daniel James Animations at Monday, July 09, 2012