Surge (War of the worlds)


The last project I have been helping out on for my assistant animator brief is a stop motion trailer for ‘The War of the Worlds’ by Zeke Ares, but due to copyright it was changed to the new title of ‘Surge’. I have been very excited about this project for a long time. Zeke told me he wanted me to be working on this way back in 2011 as I am a big fan of War of the Worlds and I jumped on the chance to work on it. I was made the lead animator right away, so I knew I would not be doing much on this project until we came to animating, but as things were being built I could not keep way and helped.


As soon as Zeke had the first small tripod (core pod) puppet test made he handed it over to me so I could do a walking test and show how a stop motion tripod would move. I spent the rest of that day animating the test, taking my time so I could get the motion right. The end result was that the core pod did move very slowly but I was happy to get the motion of three legs right. And for the final animation we would speed up the moment of the legs. 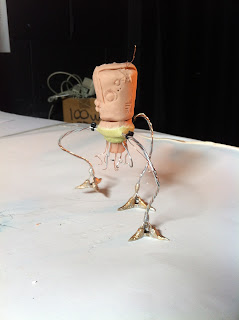 Happy with the test, I wanted to do more tests as we had this idea of making the core pods jump and land on people. To make this jump test look more like a shot from the film I took Zeke's old War of the Worlds inspired diorama he made back in 2011. I spent two days animating this test as I had to work around the limitations of the set, mostly waiting for the glue and paint to dry. The puppet also had to be screwed to the sets and attached to a jumping rigged which was painted out in the editing.

When I showed Zeke the test he was over the moon with the test shots he turned round and told me he wanted to make me the Co-Director of the project. This would give me more of a creative input as to how some shots would look, as well as sharing story ideas, and to help out when doing the after FX and editing. I jumped at this chance and was so pleased that he had let me be such big part of his final film. 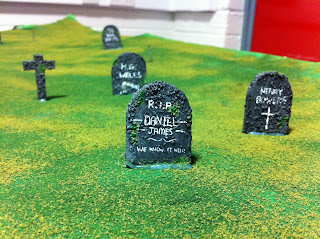 I won’t go into too many details on how the shoot went as the film will not be released online until 2013, and there will be a more detailed post on the animating and editing side of the production then. But what I will tell you is that Zeke and I did the entire Stop motion shoot and we had a brilliant 2D and after FX team. There was also so one big shot that we shot using 3 cameras from 3 different angels all at the same time.

If you can’t Waite until 2013 here are the two test animations I did to give you guys a tees of what to expect. And as always your comments and feedback are welcome.
Posted by Daniel James Animations at Wednesday, July 18, 2012