After the Christmas break a hand full of us spent a week caring on carving the wood from foam board making a wood pattern with a scalpel. Once done we glued down and covered the foam in aertex paint to give it a ruff texture to paint on. When this had dried me and two others started to apply the first coats of dark brown paint.  When this had dried we started to apply the lighter coats of brown and yellow paint to the set.  To get the required paint effect to the set the paint was applied by dry brushings.

When the set was finished we began to work on the props.  My task was to make a giant fountain pen that the flies use to attack the spider with.  I made the pen by having the inner cardboard tube from a roll of cling film which I covered with multiple layers of tin foil to get the shape needed for the pen.  Once I was happy with the shape I then went over it with a thin layer of Super Sculpey.  I painted this with multiple layers of acrylic paint to get it exactly the right tone to fit in with the animation style.  To make the pen nib I cut a thin slit in the end and used a shiny golden card to make the nib and glued it in place.  As this pen would be use by the flies, which would fly around with it, I drilled a hole in the side to place the K+S tubing into, so I can mount the pen on to a flying rig.

With the pen finished I was given the task of making of the stunt fly puppets. Using an original test  maquette made by a different student I remade it adding a few adjustments which would make it more of a textured puppet on the face, so it would appear more 3D and much less like a 2D painted sculpture.  The maquette took 3 days to make and once I was happy with it I took it into the plaster room to cast the mold from it.  It took a day to make the first half of the cast; I then removed the clay to make the second half.  When the plaster was dry I opened it to remove the clay sculpt and put it in the drying-out room for a week. 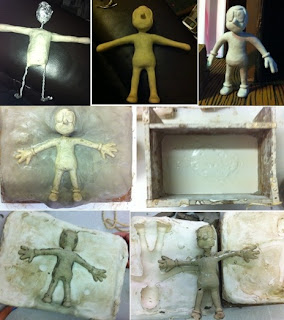 When the mould had dried out I started on making the armatures for the flies.  As the flies I am making are the stunt flies I have to make 3 identical puppets.  As these are the stunt flies they will not be used as much as much on screen as the two hero fly puppets.  This meant I could get away with making the armatures out of very basic wire, milliput for the joints and metal plates welded to K+S for the feet. 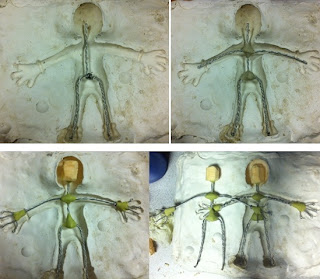 With the three armatures now all made I handed them and the mould over to my tutor so he could cast the puppets up in foam latex. As he could only cast one puppet at a time, he would give me one finished puppet and started casting the next one. I would use this time to get the puppet ready for painting.  I did this by cutting off the extra foam with scissors and touching up the smaller parts with a soldering iron. 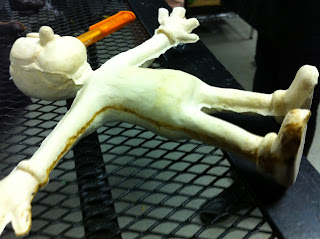 With the puppets now cast in foam latex I started to paint them.  As these are the stunt flies and have a very basic colour scheme, I painted them with a half and half mix of acrylic paint and liquid latex.  I painted the body head, hands and feet of the flies, but, due to time restraints and setting up the set, camera and the light for animating, I did not have time to finish the faces of the flies for the Monday morning.  So I got a course mate to paint them with the main base colour for me, I then went over the black parts of the face again, adding the finishing rounded off look to the face.  The mouths and eye shapes will be made on the day, by whoever is animating them, out of painted card. 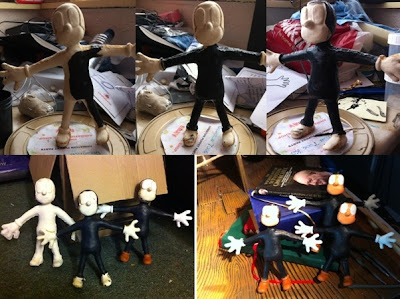 With everything now all complete, it was time for me to start animating.  My scene was the first shot of the films where the spider sings the opening song.  This shot took me and my tutor a day to set up.  We had to set-up lights and camera as well as solving problems with puppet and the set flooring, as the magnets would not hold with the foam board under it.  Once this was done I had 2 and a half days to animate the 17 seconds-long song.  This was a tricky shot for me to animate as I had to time the body movements, hand gestures, and lip sync to the prerecorded song.  This was a tricky shot as the puppet was so big, had 6 legs that’s had to keep still, was very top heavy and would start to fall when in mid-shot, it took a lot longer for me to animate.  With the shot now finished I am very happy with the way it looks and I think I did a good job get the character across.  There are some things, if I could reshoot, I would like to change, mostly on the arms’ animation.  As I feel in some places you can see where it was getting close to 5am and I was rushing to get it finished! 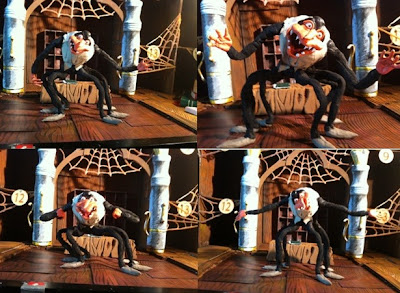 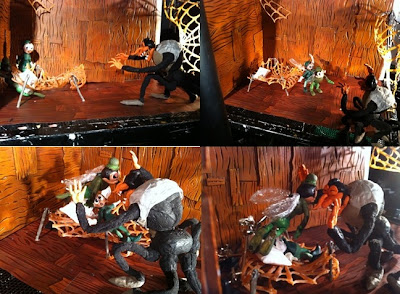 Here are the final two shots edited together, I hope you enjoy it and as always your comments and feedback are very welcome!