As part of my conflict of self brief I was asked to film myself acting out an interaction with my dark side character, in front of a green screen. To do this myself and a course-mate Nicola Everill booked out the university’s green screen room. I did around 5 takes with myself acting on the green screen with Nicola controlling the movements of the hat, with it attached to a piece of string tied to a pole. Once I was happy with what I had recorded I imported the multiple takes into the After Effects, cutting the best take down into the required time of 15 seconds.

With the main recording of myself completed, the next stage was for me to record back plate. As I want my clip to be set in a park, I went to Hanley Park with a friend’s DSLR camera and recorded a single tree that I knew would be the right one for my stop motion puppet to hide behind. I took the clip from the camera and imported it into After Effect so I could edit the green screen and the back plate together. 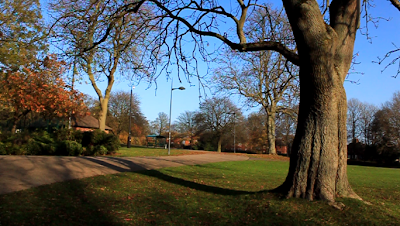 To remove the green screen from the footage of me I cropped out the parts of the frame I did not need using the pen tool. I then used the chroma key removal tool called keylight 1.2 to take out green colour itself. In order get the best result I removed the green using the MattView only. Once the green was removed I realised that I was too large in the frame and I had to resize the layer with the free transform tabs so I would be right in size and scale next to the tree. 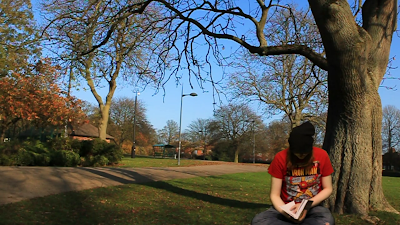 I then exported this clip so I could use it as a reference when animating my puppet with Stop Motion Pro on the blue screen roughly to the video clip. I had to use blue screen instead of green as the puppet I was using has green skin and would key out in the editing. For me to be able to animate the puppet coming from behind the tree with a sense of depth to the movement, I set up a blue board so that the puppet could interact with it and would also key out in the editing. 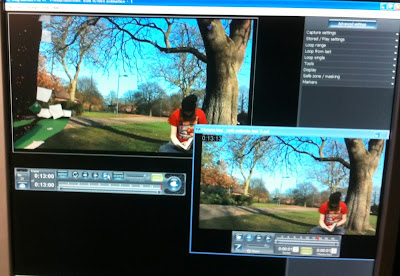 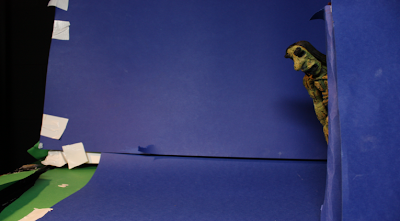 I then exported the finished animation as a full quality QuickTime file and imported it into After Effects to start on the editing. I keyed out the blue screen in the same way as I keyed out the green screen. When organising the different layers I realised that I had to do a lot of moving around and doubling up with the layers of me sitting down. I had to do this as the arm of the puppet had to be behind me, but the hand of the puppet had to be in front of me so it could grab my hat right.In total I ended up using 4 separate layers of me to get the final result. 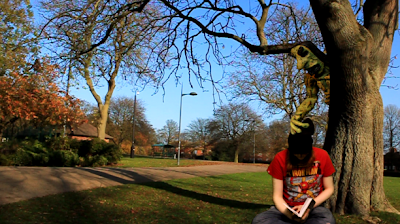 Once I was happy with the final editing I exported it out of After Effects to put the sounds and titles onto the videos.Here is the finished animation I hope you enjoy it and your comment and feedback is always welcome

that's brilliant! I may have to find my green screen animation and try to get it polished off. It's a little rough around the edges!

thanks very much Tom happy you liked it!, you defo should give it a re edit would be grate to see :D