As part of my audio production and lip sync module at university I was asked to make a stop motion animated interview. To get the required recordings I went out with a two class mates Joel Townsend and Jennie Lee to interview some people in and around the university. I then took my favourite recording and cut it down in to a 15 seconds clip.
Once I had my 15 second clip I then had to start coming up with ideas for the character and set design. When doing this I wanted to match the interviewers’ voice and make the character look normal and average, set with in a very basic plane walled office room with hits of a personality with the posters. I did three different designs and I decided to use the third one as the first two were too over the top and cartoony. I then did a quick sketch of squirrel related props and how they would fit on the design. 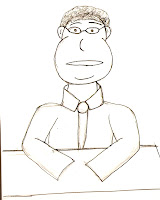 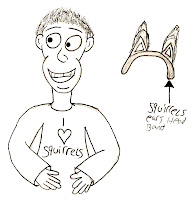 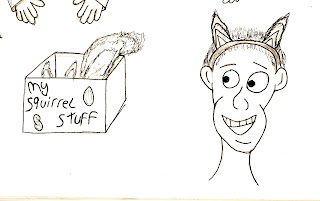 Now that the character design was completed, it was time to make the puppet. As this puppet will have replacement mouths I started making the head first. I needed a solid head to be made before I started to design and make the extra 13 replacement mouths. To make mouths I covered the solid head in cling film and sculpted the mouths straight on to the head, I then used the cling film to peel the mouth of the head as a whole piece without any damaging. 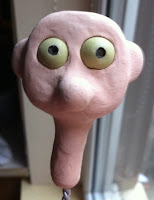 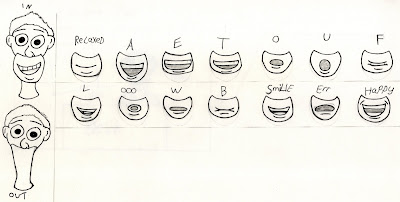 When all 14 mouths were made I added the hair and eyebrows to the head, then I made the body. When making the body I decided to get rid of the “I love squirrels” writing on his t-shirt because I could not get a way to add to the plasticine without it getting spoiled when animating. 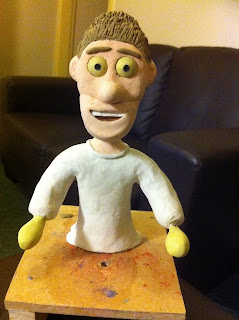 The set was very simple and quick to make, the main walls were made out of a cereal box. The desk was made out of card board and glued to wooden base the puppet was sculpted on to then painted. I then realised there was no way to tell where the character was, so I came up with the idea of a plate that can go on the back wall saying “Boring Jobs R US”, so you know he is in a very plain and boring office. 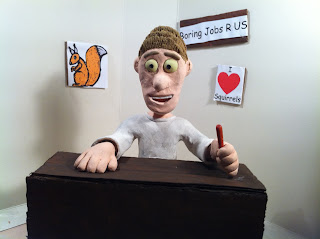 With the puppet and set all completed I now had to fill out the dope sheets before I could start on the animating. The sound clip is 15 seconds long and I was shooting on ones, this meant the dope sheet was 6 pages long. In doing the dope sheet I planned out what mouth shape I will be using by numbering the mouths and writing the number for the right mouth in the box next to the letters. I also put in some of the big head and body movements that the puppet will do, but some of the movements will be made up on the set when I am in the moment. 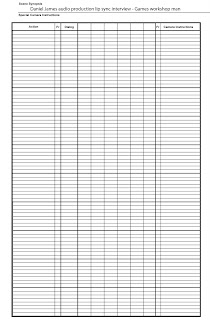 When it came to animating I was very concerned about the time I had left and the amount of available animation rigs free in the university. To make things a lot easier for me I decided to animate this clip in the free room at my house using the same camera, laptop and lights I used when working on Viv & Mandy. The only down side to this is that the lighting and picture quality would not be as good as it would be if I animated on the university rigs and that I would have to animate the whole interview in one go. 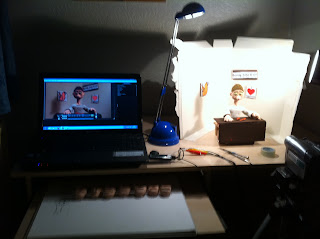 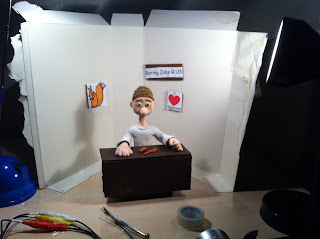 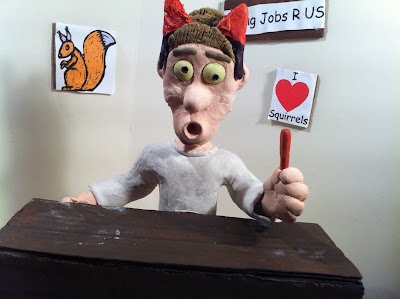 This took me around15 hours giving myself 1 hour to do a second, I’m very happy with how the final animation turned out.
I hope you all enjoy it and your feedback is all ways welcome!
Posted by Daniel James Animations at Sunday, January 08, 2012

thanksvery much! very happy you liked my work!1