Conflict of self part 3:

Its time I gave you all on update on how the conflict of self project went now that it’s all finished with. After I did the animation test that I posted in the last update on the project, I carried on making the bad side puppet by adding the extra foam and body details to it with copydex glue and shaping it. 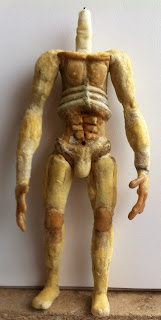 With the body now completely finished I then started working on the head of the puppet. To make the head I used supper sculpy with a ball of tinfoil in the centre to make it lighter for animating. I made the upper part of the head as one piece with the tassel for the hair sculpted into it. When I was happy with the sculpt I covered the hair in foil and to stop it from burning and cooked the head so it was a solid piece.

As the head is now a solid piece I could now drill in the holes for the wired jaw and eye browse. I put the pieces of wire into the holes and started sculpting the jaw over them with sculpy. When I had the basic jaw shape made I then cooked it solid, re-drilled in the holes, glued in the wires to the jaw and head, I then sanded the jaw and neck down more into the slim and pointed shape I needed. 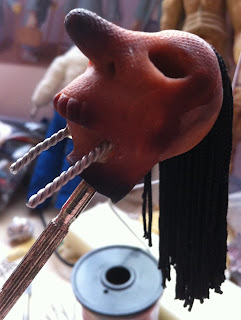 The next step for me was to drill the holes into the upper and lower jaws in order for me to glue in the wires for the lips. I had to do the lips twice as the first attempt I did made the lips look like the head was smiling and was sad at the same time and it did not work out well.

When I was happy with the lip wires, I took the head and covered it with spray glue, once the glue was tacky I then cut and placed 1mm thin foam bandage over the wire to make the lips shape, I then placed more foam over the wires on the jaw itself, so there were no caps. I then covered the rest of the head in foam so the liquid latex would have something to stick to when coming to painting it.

With the head all made, I then glued it to the main puppet body. The next step for me was to paint the puppet in liquid latex. This is a technique I have never tried before and I did not want to do it wrong and mess the puppet up, I decided to ask a good online friend Richard Whillock who I knew had lot of experience working with liquid latex as I have seen the amazing puppet work on his blog.

Richard was very helpful and gave me some grate hints and tips on what I need to do so I will get the best results, so a big thank you goes out to you mate. I gave the puppet a first cote of dark green. When the first cote was add and dried an interesting thing happened to the foam that gave it a brilliant texture that relay helped to give the skin a grate look once the other 5 cotes of latex paint were added. The last 4 cotes were added to highlight and show the shape and mussels of the characters body from different camera angels.

With the puppet s paint job finalised I just had the small tasks left, adding  the eye browse with milli put, painting them, cutting and gluing the hair in place so it won’t move when animating. As soon as I had the puppet finished I took it straight into uni and did an animation test with him to see how everything worked and looked on camera before I came to animating the green screen character Interaction with him and final conflict of self animation. 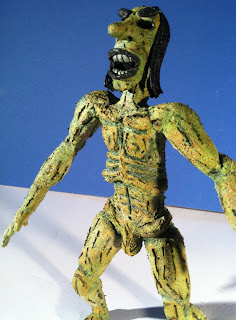 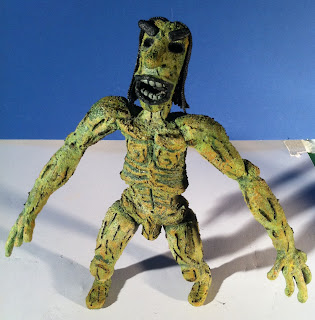 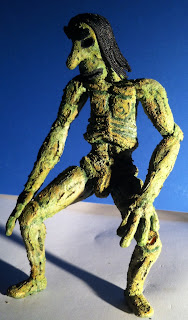 Here is the animation test I never got to finish the walking test as it got too late in the day and the rigs got closed. Hope you all enjoy it and as always you feedback and comments are welcome.

Thanks for taking time for sharing this post, it was excellent and very informative. Its really very useful of all of users. I found a lot of informative stuff in your post. Keep it up.
Liquid Latex