Hello every one, i'm back with a full update

Hello every one! I know it has been a long time sins my last post but I have been really busy with uni work, but I have got lots of news to tell you all.

I will start off with saying a big thank you to everyone who has watched Viv & Mandy in the big clean up Part 1 and for all the very positive Feedback and comments on it. The film has only been online for just over 2 mouths and it has all reedy had over 13,300 views on the Wallace & Gromit website, over 620 views on YouTube and over 45 likes on the Viv & Mandy Facebook fan page. 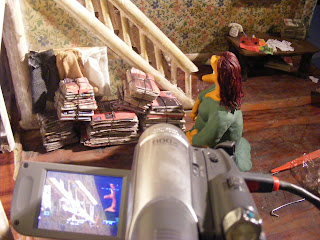 I am now working on Viv & Mandy in the big clean up part 2 at the same time i am working on all my work for uni. This has been a lot harder then i first fort at the start of the term to get the free time to book out an animation rig. At this moment in time i have got over 25 seconds of V&M Part 2 completed. To keep myself busy over the weekends when i am not doing uni work, i have been storyboarding and building and new top secret set. This will show what it behind the sliding doors at the end of part 1 cliff-hanger and introduce a new character to the film.

On the 23th of October we had visit and master class form Aardman Co founder Dave Sproxton. This lasted most of the morning and he told use a lot of behind the scenes secrets and news. In the afternoon he did a Q&A, in this he told use the best way of getting into the industry and how to produce a good eye caching show reel.
After the Q&A people could go up to him ask him questions and get your Aardman goods signed buy him, so i of course went up to him and asked him to sine my Aardman Cracking Animations Book, gave him my business card and asked if he had spotted the Viv & Mandy hallway set when he had a tour of are uni studios and what he fort of it. Unknown to me one of the tutor had picked up my set with the Mandy and the Old woman puppet still fixed to it and placed it in the centre of the animation rig and put a big shining spot light over it so he did get to see my set and he said he liked the look of the set and puppets.

In the middle of November we had a surprise visit from award winning animator Barry JC Purves who was passing by stoke on the train and fort he would pop in to see the tutors ad he is a guest tutor about three times a year at my uni. 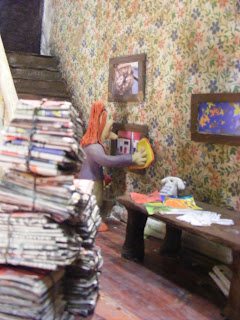 He asked if any of the students would like to show him there work and get some feedback on it. i asked Barry if he would watch Viv & Mandy Part 1 as i no its not uni work but would be nice to get some feedback on it, “he said yes of course that’s why I’m here”. So after a very nervous 5 minutes of playing the film he turned round and just said “what’s in the room?” “Are you doing a second one?” He then went on to give me very helpful feedback in saying some of the camera work can confuses the audience at times and the scene shot over two years ago with Viv & Mandy in the shop were a little ruff in the animating and movement of them, and i need to do more over the op movement so it comes across better. But as i said the stuff was animated over 2 years ago and the animation in the house with the old woman is where i am now and he had nothing to say about that stuff, so i said “thanks very much for watching and feedback” then got back to my work happy with what he told me and know what i need to do and change for part 2.

As part of my uni work we were asked to do a short animation where someone answers a phone call. As I was working on Viv & Mandy in the big clean up Part 2 at the time he asked I did this animation task with Viv. I should mention that as part of the task we were not allowed to﻿use talking or lip sync as the tutor did not want it to be over complicated. I hope this will give you guys the Viv & Mandy fix till a clip or a trailer is out for Part 2 next year.
P.S sorry for the long delay in news posts agen I’m hoping I will get better at doing uni work, animating and keeping the blog up to date in the New Year.
Posted by Daniel James Animations at Tuesday, December 28, 2010