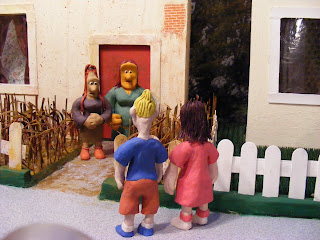 All the shots facing the Boy & Girl talking to Viv & Mandy were shot over 2 day with the boy talking 1 day and the girl talking the next day. So I could get the right depth and space I wanted to the shots I had to place the camera fare back in the street set looking out the door and have a very large set on its side so it took up almost all the studio. I did come across many problems have the set like this when animating these scenes, manly getting reaching over to the puppets so I can animate them with out knocking props and parts of the set. 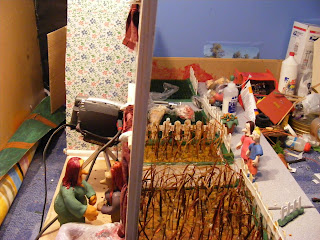 After completing all the shots on the street with the Boy & Girl I spent the next day doing the shots of Viv & Mandy going into the house and the letters been posted and falling to the floor. After that I spent the next day repainting the hall way of the messy house set. I did this because I never did think that the first way the set was painted never did show the level of mess what I wanted to. I repainted the walls, the photo frames, all he wood work and the sliding doors. 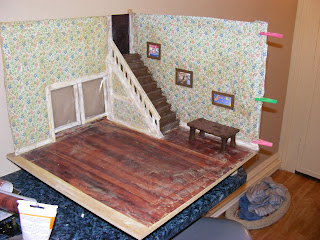 After the set was completed to a standard I was happy with I then had to make the 8 piles of newspapers that will be scattered around the hallway. To make theses I had to a full newspaper cut it in to long strips fold them, stake them up on top of one and other and tie them up. In total it took me over 7 hours to make the piles of newspapers. As I was using normal newspapers the size and scale of the text was not right for the set. To get passed this I made a newspaper on photo shop and gulled it to the top paper of the pile. 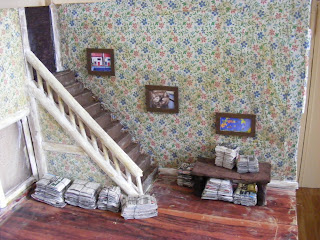 Now that set is completed I final got to spent he next two days animating the first scene with the old woman on the phone to Mandy. The shots I used for this scene were very tight close up shots of the mouth and the phone, as the shots were so close up the lip sync had to be spot on. As the old woman has no teeth I really had to use the shape of the mouth to show what she was saying, I I spent to days working on this scene and had to reshoot a line at one point I do feel that this is the best and most detailed lip sync I have done to date. 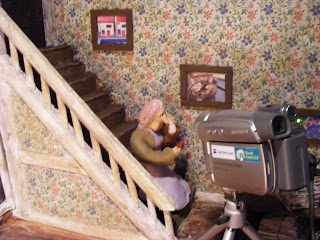 After the to days of animating the Old Woman on the phone I then when on o animate the Old Woman walking up to the Door and picking up the post. As the puppet of the Old Woman did not have the final completed wire framing that hero puppet will have. To animate it leaning down and going back up took 3 take in the end to get it looking right. 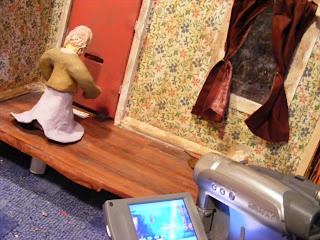 Now I have edited in all the footage I shot this week the total animation now last 4 mins and 15 secs. With the animation running well I now have to tack a brake and make a new set for the car dashboard with a built in Sat nav. I’m still making this set and there will be images of this set in my next post. To day I spent 3 hours making 8 different cover for magazines. These are the front page that will go at the top of each of the 8 piles of newspapers. 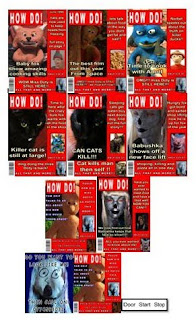 Thanks for reading my latest blog post pleas come agene in 2 weeks for a new post on how the production is going on the new Viv & Mandy.
Posted by Daniel James Animations at Sunday, August 01, 2010