First off all I must say sorry for the 2 day delay in posting my up date is been a funny old last 2 weeks, the first part of the first week was spent doing self portraits of different facial expressions for when I start uni on the 16th. The second part of the week was spent recoding pick up lines and importing all my sound FX CDs on to my hard drive.

The second week is where all the editing really started. The first step was to finales all editing on the animation its self, making share it all cut together ok and all the shots I needed were there. After that I then when on to add in the opening and closing titles to the animation, I did these on Flash and exported them and imported them in to the animation.

I then went over all the sound FX I imported to find music for the postman scene, loading up the van scene and the closing credits. As well as looking for music I also went over all the FX for sounds I could use in that animation it’s self. After going over all of them all I realised that in order for my animation to have a sounds that would really fit in with my style I would have to record 70% of the sounds myself.

After editing the 2 music tracks I found from my copyright free CDs. I then add in all the sounds that I found will fit in with the style of my animation. i then add a meeting meting with my dad were we chatted about what music he can play that I could use in the finally animation. After the meeting we had come up with 4 themes that can be played in all 4 parts on this story.

The first one was a slower and cleaner version of the DJ animations theme that you can here at the start of my show reel and end credits of Morphs cake hunt. This will play at the start on film we also recorded a theme for Viv & Mandy, the house and the old woman. 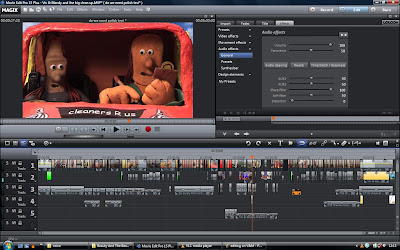 As well as editing and Part 1 I have also been recording voices fixing models and story boarding on a scene with Mandy and the Old Woman that will be in part2 of Viv & Mandy in the big clean up. As of to day I have got all the music edited into the final cut of Viv & Mandy, and my plans are to spend the week recoding more background and props sound and add then in. I also plan on starting on this new scene with Mandy and the old woman.

I only have 2 more weeks left to get as much animation as I can done before I head off to uni were I don’t know if I will be abele to keep working on Viv & Mandy in my free time or not. If not I will only have time to animate when I come back home in the holidays.

As the editing is going so well I will be doing a new post by the end of the week showing a new poster and a realise date on when Viv & Mandy and the big clean up will be out!
Posted by Daniel James Animations at Tuesday, August 31, 2010

This all looks great!