Busy two weeks and got many more to come!!


Now that the set was completed it was time for me to start animating. The first thing I animated on this set was the close ups of the post man posting the letters. I did this as it was tight close ups and would give me a good length of time to get used to working on this set. I hat to shoot three letter boxes, the first one was done in one day and the last two were done on next day. 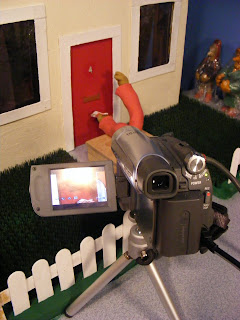 After the postman was completed, I when online and ordered 8 new super strong magnets so the puppets will stay still and for walk cycles. After I ordered the magnets I went into the work shot / studio and started to animate my first scene with the new postman puppet. i spent the rest of the day animating all the shots of the postman going up to and waking away from the all the clean houses. 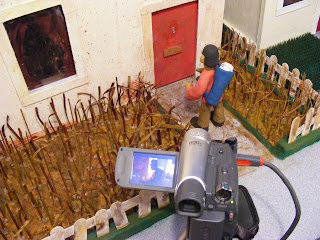 The next day I picked up from were I left of the day before and shot all the shot of the postman going into and from the messy house. To get the shots were the camera will see the houses on the opposite side of the street I had to use the small scale houses and use perspective so hey don’t look to small and out of place. 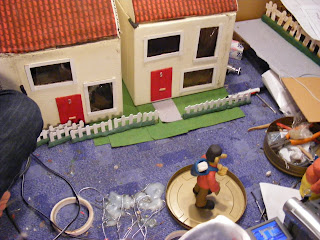 The next day the magnets arrived in the post, when I opened them I went into the studio and set up the full scale house set for the postman puppet and the magnets. When every thing was set up I spent the rest of that day animating my first walking scene with magnets. 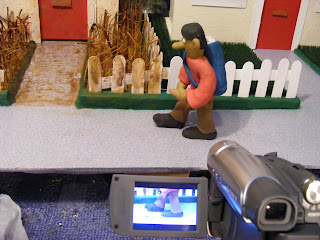 When the walking shot was completed I then exported all the completed shots and edited them in to the final animation shot so fare. With the new animation added in I now how the opening sequence of the film completed lasting over 50 seconds, I now have 4 minuets over all completed.

With all the shots with the postman completed and edited I can now start shooting with Viv & Mandy them selves. This will be the first time I have animate with then sins April and the first time I have done any animation with lip sync sins before Christmas. Before I can do any of that I needed to spend almost 4hrs getting them ready for animating. As of now this is how Viv & Mandy are in the studio reedy for a full day of animating with them tomorrow. 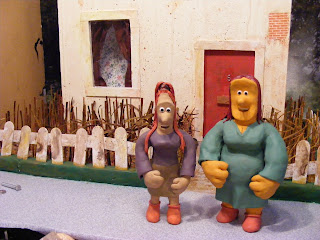 So that’s you all up to date!, please do come back in 2 weeks time were I will do another update on the production of the all new Viv & Mandy.