I had the joy of been at the 20th Bradford Animation Festival, this was my first time going and what a year I picked to go. As there was a lot happening over the week I will focus this post on my personal favourite events from the festival.

On the opening night of the festival I got to see a screening of Nightmare Before Christmas, the film was been screened To celebrate that like the festival it's the films 20th anniversary. Now of-course I have seen the film A LOT but I have never seen it on the big screen, seeing it like this was brilliant and I was amazed to see new props and details in the sets on almost every shot. Iv you ever get the chance to see it on the big screen do it! 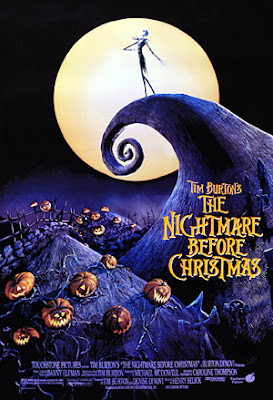 Independent Animator Lee Hardcastle gave a very interesting talk on how he to become a success from posting his animations on YouTube. I first noticed see Lee’s work when he posted the evil dead in 60 seconds, Pingu's The Thing and it's grate to see that he is doing so well. I Found it fascinating that he has managed to turn his crating animations for YouTube hobby into his full time job and it.s something I'm very interested in looking into my self. Take a look at some of Lee's work here.


My highlight of the festival was getting to see the brilliant Ian Mackinnon and Peter Saunders receive their lifetime achievement award. For you guys who may not know Ian and Peter are the owners of Mackinnon & Saunders the UK's leading stop motion Puppet makers and they could not be nicer guys. 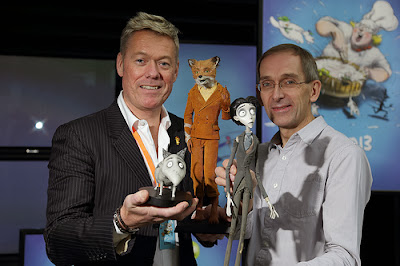 photos from BAF Flicker
You will mostly know them from their work with Tim Burton on The Corpse Bride, Frankenweenie and with Wes Anderson on Fantastic Mr Fox. They have mostly been busy working for over 20 years on countless children's TV shows including: Bod the Builder, Bill & Ben, Postman Pat, Engie Benjy, Fifi and the Flowertots, Raa Raa the Noisy Lion and most recently Toby's Travelling Circus.

They are a true inspiration to me and it was brilliant to see them getting honoured for their very hard work.  If you have not do take look over there site here!! mackinnon and saunders
On the last day went to see the brilliant Oscar winning independent Australian stop motion animator writer and director Adam Elliot in conversion with the grate Barry Purves. I first saw Adams work when I got to see Mary & Max and Harvey Crumpet and I became fan of this unique style of film making right away. 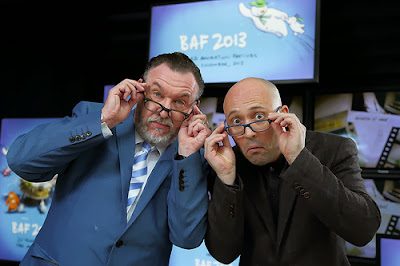 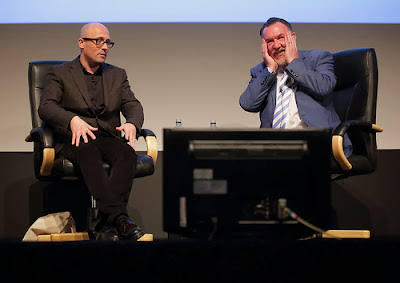 photos from BAF Flicker
Apart from seeing his films I did not know all that much about Adam so it was grate to final get to find out more about the man behind it all. For you guys who may not have seen Adams work cheek out the Mary & Max trailer here

Before the talk started Barry and Adam were talking in the caff where I was also sat, this was where Barry spotted me came over and introduced me to Adam. I got to have a good chat with Adam and I also got to show him The Piper puppet, biggest complement he gave me was when he asked if Mackinnon and Saunders Made The Piper for me!! 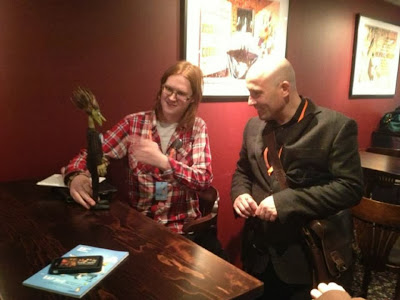 Big thanks to Barry Purves for taking the photo.

The Pipers Having a good week at BAF. 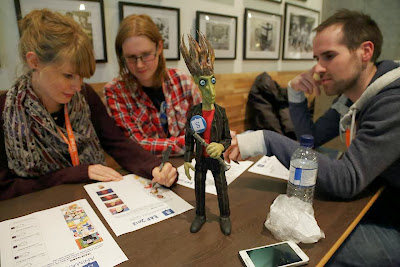 For my first time going to the Bradford animation festival it was a brilliant 4 days and I am very excited for BAF2014 so roll on next year and I’ll see you then!
Posted by Daniel James Animations at Tuesday, December 10, 2013

It was fun for sure. Did you get any feedback from Adam?

Roll on next year!

no i have not heard back from Adam yet, but he is a veru busy man

see you next time!