It’s been a while since my last post so I think it’s time I give you guys an update as to what I have being up to on the production of Viv & Mandy in the big clean up part2. The first thing I’d like to say is a big thank you to everyone that watched the trailer in the last post and commented, your feed back has being fantastic.
Now with the bad news, Due to technique difficulties with the laptop I use to animate on I have not being able to animate now for 4 weeks as I’m waiting for the laptop to come back. There is good news tho, the weeks were I have not animated have in its way being good. As I have had the time now to work on the last parts of the script and get the new big main set for Part 2 completed.
This set will show what Viv & Mandy saw at the cliff-hanger in the end of Part 1, I am very happy with the way this set looks and I hope you all will like it. As the set is a secret I won’t be show any full images off on here, but I will be showing some close ups of things that are in the set to give you a sneaky idea. 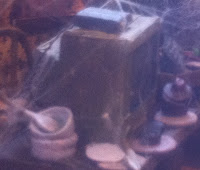 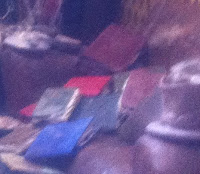 As well as set building I have used this time off to repair and make new copies of all the puppets that I will be animating with over the course of time on the film. Here are some images of the new waist up puppets that I have made new far part2. These puppets will be used mostly for shots were they are cleaning and walking in shots from the waste up as I can get lots of movement in to them.  I still have to make a new full lighter copy of the Viv & Mandy puppets for walk cycles; I will be making them when they are needed towards the end of the shoot. 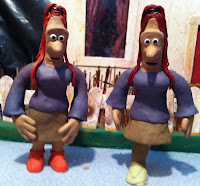 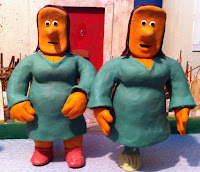 New Puppets
The animation laptop should be back by this time next week and I’m very much looking for would to getting back in the studios to carry on animating on Viv & Mandy in the big clan up part 2.
That’s all for now guys, keep a lookout for more news and updates over the coming weeks.
Posted by Daniel James Animations at Monday, August 01, 2011

I can't wait for viv and mandy in the big clean up part 2! Do you have any tips for sculpting hands?

Thanks man! Hands are tricky iv found it best to make the basic hand stump without the fingers first, then roll the shapes out then add them to the hand, i hope that’s helped you out mate.