Conflict of Self Part 4:

It’s being a long time sins I last posted anything on here as I have been very busy with all my university work. But I believe now is the time for updates, but before I can tell you about the new projects I have been working on I think I should finish off the news on how my conflict of self project went. 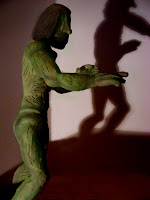 In my last post on this project I was at the stage where my bad-side puppet had just been completed and I had shot an animation test. The next step for me was to make a start on the good-side puppet, the original idea for this puppet was to make it the same way as I did the bad-guy puppet but with a wire armature instead of a ball and socket one. As the deadline date for this project was getting closer i would not have the time to do it that way. So my back up plan was to make the puppet using a wire armature with clay over it for the body a real fabric outfit and super sculpey head. 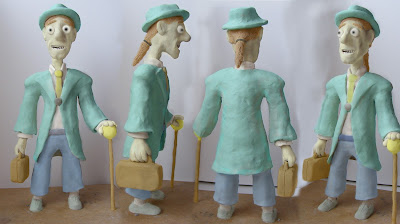 As I was pressed for time when making this puppet I did not take all that many photos of the making progress. Here are the only photos I got of the super sculpey head that got burnt in the oven that I then covered in clay, the body of the puppet with a rough outfit design on and the final puppet on the set. 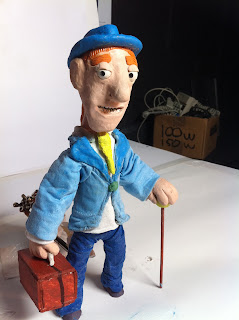 When i came to animating i started on the shots were you see the bad-guy on his own, like getting out the suite case. I did these first so i could get a head start on the animating as i knew how this puppet acts and the way it moves when I’m working with it from doing the test.

By doing the single shots first it gave me more time to work with the new good-guy puppet and find out the best way to work with it. In some of the earlier shots i spotted the puppets had a problem with keeping its balance and wobbling when moving him. As i did not have time to go back in and fix the armature i used my set of help full hands as a rig to support it and did my best to keep it out of shot. 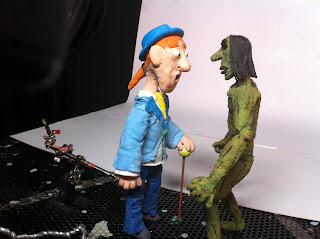 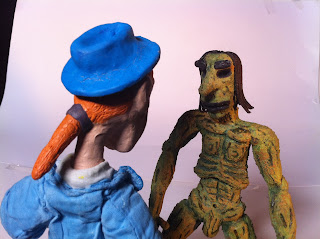 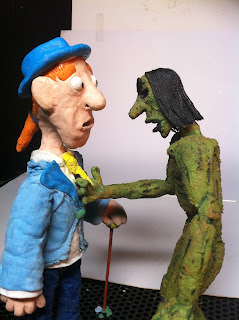 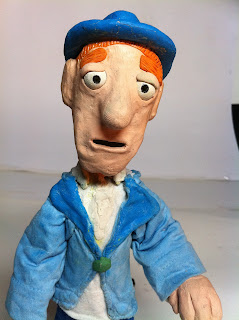 The animation took around a week and a half to do and was all shot on ones. The last shots were close ups on the good-guy and animated on the morning of hand in. I then exported all the shots and did a very ruff edit and sound mix for the hand in. I then took the Christmas holidays off from doing uni work, when I got back to uni went over all my sound file and recorded new dialogue for the final sound mix and edit for this animation.
There is the final animation i hope you enjoy it and as always your feedback is welcome.
Posted by Daniel James Animations at Tuesday, February 28, 2012