The production of Viv & Mandy in the big clean up part 2 is coming along nicely. The First scene that IV animated are the in fact reshoots and extensions of the scenes that I worked on when I had finished part 1 and over my time at university on the hallway set. These were only 3 shots and did have some technical problems in them regarding the lighting and staging. 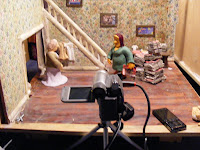 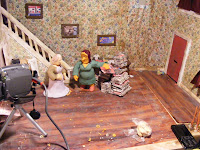 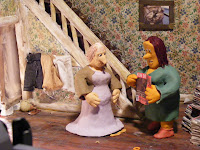 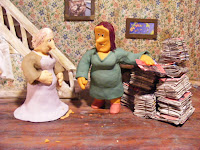 Part 2 is going to look very different to part 1 animation wise, this is as because the FPS (frames per second)  have changed,  from been shot on ones at 12 FPS to being shot on ones and 25 FPS. This allows me to get allot more smooth and smaller movement in to the body language and lip sync of the characters.  I’m still getting used to working on 25 FPS  as when I first shot on them the puppets  looked so different to how they did in part 1. I kept on shooting more and more this way and I’m very happy with the way the animation is looking fare.
That’s all for now guys, keep coming back for more news as I carry on with Part 2!!
Posted by Daniel James Animations at Sunday, July 03, 2011