This is the second of my two updates for my new puppets and animations which I have done during my time at uni. In this update I will be focusing on the mythical creature puppet made out of foam latex.

In my last post I had got to the stage of making the mould for the casting and getting ready to start on the armature. The puppet is now cast and completed and in this post I will show how it was made.
The first thing I did was to get the finished mould open and get the sculpture out. As I had not done this before, I got the tutor to this for me as I did not want to damage the mould itself.
Once opened I had the long job of taking the sculpture out, but in doing so, the head, feet and arms were completely destroyed. I then had to go over the mould with my tools and get every last little bit of clay out, as any leftover clay and dirt in the mould will spoil the puppet when it is cast.
I then started working on the armature for puppet. This was made using different thicknesses of wire cut to the size of the mould, twisting and gluing them together. To make a grabbing point on the puppet for animating, I took a piece of foam, cut and sanded it down into shape of the bump and holding it in place with some glue and milliput. 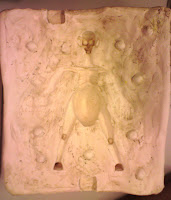 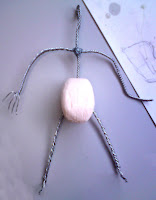 I took some milliput and placed it around the wire on the chest, legs, finger-tips and the big ball at the top of the head. The purpose of this was for the same reason that I added the lollipop sticks on the steam punk armature. I then cut and glued metal plates for the feet so I can use magnets to hold the puppet in places when animating. I then took a small drill to the milliput on the head to make the holes for the jaw and forehead wire which I cut to shape and then glued.
Now that the armature was complete, I had to stretch and bend the wire so it would line up perfectly to the mould. Once it was lined up, I then glued the feet plates in place to stop it from moving around when injecting the foam. Now that the armature and mould were set up, I took it over to the mixing and casting room. As I have never done any sort of foam rubber casting before, my tutor took over at this point and mixed and injected the foam in to the mould for me. Once the foam had being injected into the mould and set, it then had to go in the oven at 90 degrees, for a minimum of 6 hours, to cook the foam fully.

Due to a technical difficulty all the moulds only had 3 hours of cooking, then had to be put into the drying-out room in the clay department. While the moulds were in the drying-out room, the tutor had to work very hard with the plastic room technicians to allow access to their ovens and mixing rooms again. After almost two months of trying to get access we were finally allowed to use them again, but under new conditions. 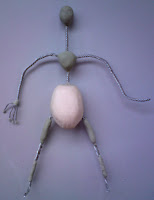 My mould was one of the first to go back into the ovens as it only needed 3 more hours of cooking time. Once the 3 hours were up, I took the mould out of the oven and waited 20 minutes for it to cool down.  I had not opened a mould before so I got one of the third year students to help me with opening it. This took us over an hour to do and as we were opening it we ended up cracking in two.
Now that the mould was open, I then had to carefully peel away all the excess foam, pulling it free from the mould. Once all the extra foam was removed, I then had to work on slowly removing the puppet itself from the mould. Most of the puppet came away very well, but the hardest parts to remove were the tufts of hair and the front of the feet, as the hair went very far back into the mould, and the feet were glued in place.

Once fully removed, I took the final puppet home and spent the night slowly cutting away at the excess foam around the puppet until it was as close to the surface as I could get it. When that was completed I added the large yellow beads in for the eyes. 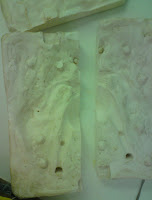 I wanted to start painting and adding colour to the skin, but as it had been such a long time in the making, my tutor told me not to bother adding colour and just get as many animations done as possible. To find a compromise, I took some black acrylic paint and painted the eye sockets and around the eyeline. To also show the tufts at the back of the head were hair, I took a grey marker pen and coloured them in. This was now my completed puppet, and after months of waiting I was finally ready to animate with it. 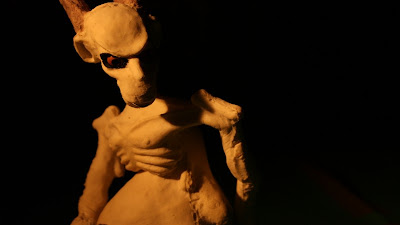 Here are the set of animation tasks I did with this puppet. I am very happy with the way these have turned out as most of the animation in the video was animated on ones and was my first time getting it to look like smooth realistic movement.
Posted by Daniel James Animations at Sunday, June 05, 2011