Had my week off animating now back at college

Had my week off animating now back at college

Had a grate week off college no only did I go to Lego land which is were 7 years ago I got the Lego studios kit started off my whole animation film making. But I also got 7 seconds of good quality animation completed.

The week started off making a small scale boy and girl that would play out on the street in front of there house with a ball. After I had finished making the puppets they when striate into the work shop and animated them.

The next day I rebuilt complete the Hogsmeat Lane which it massive and takes up all most the enterer Workshop and is very hard to set the camera up on, set lights up on, movie around and to animate on. I set up the set in the opposite direction as I waned to shoot the van driving down the lane to the messy house, with the boy and girl playing on the street and a man mowing his lawn. All the animation form that angel was shot in day. 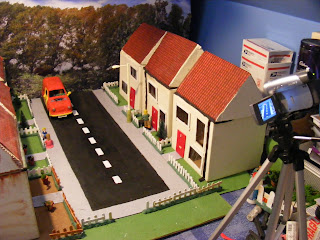 After all the shots of the van driving the lane were completed I spent the morning rebuilding the street set right direction. I did the so I can get the shots that will open the animation of the postman walking down the street.

2 days later I went back into the work shop and animated the first shots of the post man walking down the street. I had to stop animating halfe way thought the next shot as the heat in work shop got to much for the models and they started to fall apart.

I plan on finishing those shots in the next week or two so check back in two weeks time when I will up date this blog with more new and images from the production of my new Viv & Mandy film.
Posted by Daniel James Animations at Monday, June 07, 2010